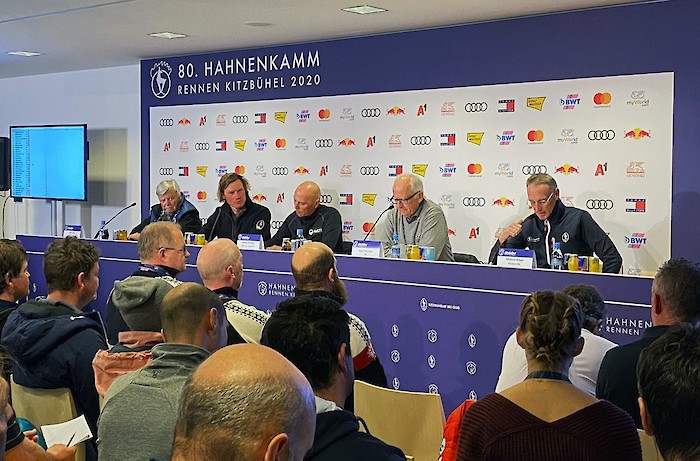 Tomorrow is the day: It’s time for the first of three World Cup races. Coaches and officials gathered on Thursday evening for final discussions. Today’s Downhill training was also briefly reviewed. To everyone’s delight, Dominik Paris made a surprise appearance via video message:

“I would like to wish all the athletes the best of luck for the races. My operation went well and I’m already looking forward to next year.”

“Before the World Cup races begin, I would like to thank my Organizational Committee and everyone who is involved in the races in any way. You and all the fans are the reason why Kitzbühel has this incredible atmosphere.”

“The course setting is very well tailored to the terrain and there will be 32 changes of direction.”

Sepp Ferstl will open tomorrow’s Super-G at 11:30 hrs, followed by Christian Walder with bib number two, the first Austrian to race. Norwegian athlete Kjetil Jansrud will start 19th, and the star of the Swiss team, Beat Feuz, just before him with bib number 17.

Before closing the Team Captains Meeting, longstanding Race Secretary Peter Eder was bid farewell. His roots deeply intertwined with that of the Hahnenkamm Races, Eder passed his position over to Alexander Katholnig. Read more about Peter Eder in this article.

Race Director, Mario Weinhandl, called the meeting to a close and wished the athletes a successful Super-G tomorrow.