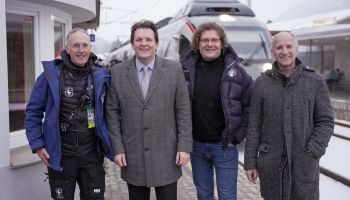 Kitzbühel-Hahnenkamm train station is not far from the finish area of the Streif and Ganslern slopes. ÖBB (Austrian Rail) and Race Organiser KSC recommend travelling by public transport.

From 20th to 22nd January 2023, ÖBB, as Kitzbühel Ski Club’s mobility partner will be ramping up their services for the 83rd Hahnenkamm Races. During race weekend, approximately 76,000 additional train seats will be provided for fans. On the Kirchberg in Tirol - Kitzbühel - St. Johann in Tirol route, the tried and tested "Hahnenkammexpress" train shuttles run free of charge at regular intervals. The Kitzbühel-Hahnenkamm stop is located in close proximity to the finish area of the Streif and Ganslern.

This year, for the 25th time, ÖBB has implemented its mobility concept with their most compact train timetable of the year on behalf of Kitzbühel Ski Club.

The sophisticated "Hahnenkammexpress" system with free shuttle trains operating on the approximately 20 km long railway line and six ÖBB train stations between Kirchberg in Tirol - Kitzbühel Hahnenkamm and St. Johann in Tirol is the backbone for the journey to and from the races.

The shuttle trains take fans almost directly to the finish area - at peak times they will run at eight to ten-minute intervals and thus virtually at underground transport frequency.

„Kitzbühel Hahnenkamm Station will accommodate around 340 train stopovers during Race Weekend (Friday to Sunday) which is around 170 more than usual. “A logistical challenge, of course, but we have a proven concept in place that will absorb these extra services again this year to the satisfaction of both visiting fans and Race Organisers,” says Martin Holleis from ÖBB (Austrian Rail) Infrastructure Division. Moreover, the S-Bahn trains will be running at double capacity throughout the weekend, which means 400 seats per train instead of 200. The regional express trains will be equipped with additional wagons in order to be able to accommodate more fans.

Around 76,000 additional rail seats will be made available during Race Weekend. While this means there will be sufficient capacity, we ask fans nonetheless to try and use earlier services, such as the REX at 08:12 from Wörgl Main Station, to travel to the races. Furthermore, all regional express (REX) trains stop at Kitzbühel Hahnenkamm Station over Race Weekend, which is also a great advantage for fans.

One unbeatable argument for travelling with ÖBB trains is the ideal location of "Kitzbühel-Hahnenkamm" As the train pulls into the station, the race slope is already visible and only a few minutes’ walk from the platform.