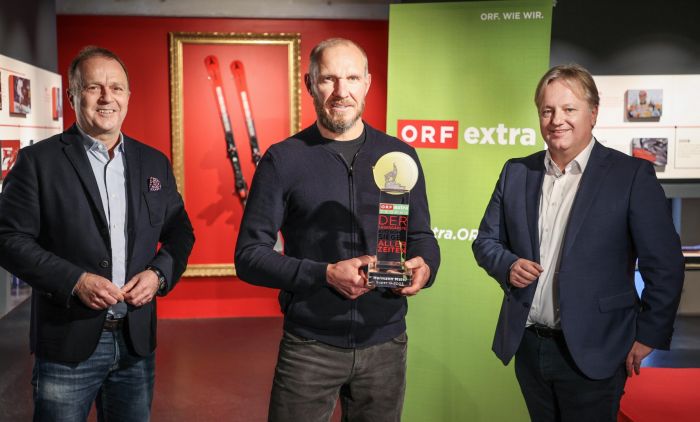 Hermann Maier's 2003 victory run is the decisive winner of an online vote on extra.ORF.at

With his Super-G victory in 2003, Hermann Maier was voted the ultimate Kitzbühel winner by "ORF extra" users in an online voting  Dr Harald Kräuter, Director of Technology and Digitisation, and Thomas Prantner presented Hermann Maier with the trophy for winning the public vote at the Atomic Pro Center in Altenmarkt. "Many thanks to all ORF-extra voters for choosing me as the most legendary Kitzbühel winner. I am delighted to have received so many votes," said the "Herminator".

After a pre-selection by the ORF sports editorial team from all the Kitzbühel Downhills, Super-Gs and Slaloms of the past decades, winter sports fans were able to choose their favourite from 16 top runs by Austrian skiing aces including Toni Sailer and Karl Schranz, Franz Klammer and Thomas Sykora, Hermann Maier and Marcel Hirscher and many more on extra.ORF.at until 16th January. Maier's Super-G victory, 13 days after his surprise comeback, received 24 percent of all votes, making him the decisive winner of the public vote.