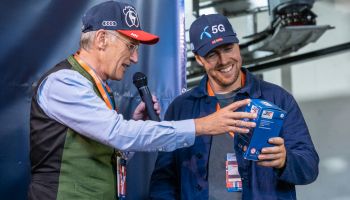 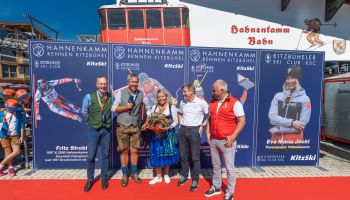 Aleksander AamodtKilde (29) and Fritz Strobl (49) were once again honoured for their triumphs on the Streif with the presentation of theirdedicated Hahnenkammbahn gondolas on Saturday, 13th August in Kitzbühel. Each, of course, received their own individual award.

Sport bring generations together – which was the case all over again on Saturday when two Downhill winners were celebrated in Kitzbühel, AamodtKilde (29) and Fritz Strobl (49), whose triumphs are separated by no less thana quarter of a century. The man from the Austrian province of Carinthia celebrated his first victory in 1997, while the Norwegian triumphed this year in January. The two likeable athletes, however, celebrated the traditional Hahnenkamm gondola presentation ceremony together. Aleksander AamodtKilde brought almost his entire family along toKitzbühel – from mum to granddad. And being here in summer suited him perfectly: “Less stress, no nervousness, beautiful weather and the same friendly people,”he said, heaping praise on Kitzbühel.As nervous as he may be in winter, Aleksander AamodtKilde has amply demonstrated that the cold seasonsuits him perfectly too, finishing in the top 10 no less than 7 times to date and achieving his first Downhill victory on 21st January 2022: “This is a great day for me, because winning here was always a personal goal. I can now relive this success all over again, thanks to being awarded with my very own gondola.”His secret to success? “If only I knew! Then I would have won more often.”Bergbahn Kitzbühel AG Cable Car Co. executive board member, Anton Bodner, expressed great respect for Aleksander AamodtKilde: “We admire you not only for your skiing prowess, but also as a person. You are a role model for young people. I wish you many more feelings of joy like you experienced during your first Kitzbühel victory – and not only from a sporting perspective.”

It was not a question of Fritz Strobl having to wait 25 years for his gondola - on the contrary.The two-time Downhill winner (1997 and 2000) has often ridden up the Hahnenkamm in his cabin. It was just the ceremonial handover that hadn’t worked out until now – a few days before his 50th birthday: “Today was a huge surprise for me, which my wife Bettina planned together with the cable car operators and Ski Club. I am very touched and proud – even 25 years on after my first victory here.”For Anton Bodner, Fritz Strobl is so much more than “just” a Streif winner: “You are an ambassador for us and play a huge role in publicising just how beautiful our ski area is. You are a colleague and friend for us, for which we would just like to say thank you!”One factor concerning Fritz Strobl, however, seems to be set in stone: His winning time from 1997 (1:51,58) remains unrivalled to this day.

“The fact that we have the fastest Streif winner of all time and one of the biggest contemporary ski racing superstars here as our guests at the same time is a very special thing,” said Michael Huber, President of the Kitzbühel Ski Club. What does Michael Huber wish for the Hahnenkamm-Races in 2023? “I can only echo Aleksander Aamodt Kilde's wish for the Kitzbühel races: less snowfall, super slope conditions and many, many spectators."

17.08.2022 11:01 7
The traditional Norwegian company is to remain the official outdoor clothing partner forfuture Hahnenkamm Races. Officials of the Kitzbühel Ski Club Organizing Committee as well as the...